Today is Ellie's seventh birthday
at April 28, 2014 No comments:

A month to go!

John and Alyssa are getting married in a month! They are putting the finishing touches to the wedding.
at April 24, 2014 No comments:

John and Alyssa are about to be married in the next month! They are getting really excited about the new baby
at April 22, 2014 No comments:

Now that Zach and Whitney have announced that they are indeed expecting their first child. Here's a picture that was posted recently 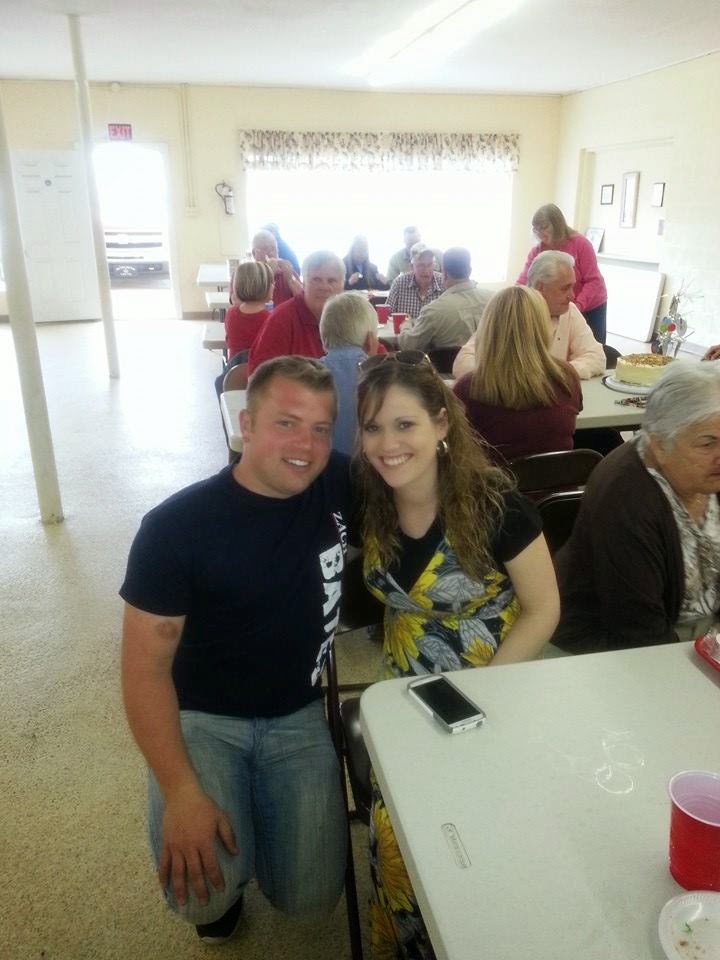 Chad celebrated his 27th birthday today with his wife Erin.
at April 18, 2014 No comments:

The family is changing by their oldest daughters entering courtship. Jessa is having a hard time focusing on their family's household task. Jinger is now packing and getting things organized for their trip to visit the bates. The duggar girls decided to play a joke on Erin since Erin can't cook. The girls put a book of easy recipes, takeout menus, and smoke alarm and fire extinguisher. Jessa's boyfriend Ben and his mom head up to Tennessee since it will be Ben's first trip. Jim Bob has came up with a new way to get everyone out on time, whoever is last owes him $5.

At the Bates's house, Jessa introduce Ben to everyone. Erin takes the duggar girls aside to show them her dress since she found it on the clearance rack at the bridal shop and they had it made to be modest. Next Ben and Jessa head over to Chad and Erin's new house which is about five miles from the family. Jessa was surprised to see the master bedroom pink.

Erin talks about how it's bittersweet since she is moving out soon and won't be able to have an all night talk with her sisters. Gil tells her that she can still have sleepovers but Erin wants to make sure that Chad is fine with that. Jana says that Chad and Erin are prefect for each other.

The duggar boys and bates Boys decided to car trasher like they did with Josh and Anna's car back in September 2008. The car was trash really bad by the boys putting sardiness and mothballs underneath the seat. Chad quickly gets the car ready and they head out to go to their honeymoon.
at April 17, 2014 No comments:

Lawson received an offer too good to resist when some people offered to make a music video of one of the original songs on his CD. The featured song, “The End Down Here,” gives a glimpse of Heaven and the hope Christians have when this life on earth is over.  (http://www.lawsonbates.com/)

So last week, Lawson and Nathan flew to Denver, Colorado, for the 8 day adventure and film project. We are grateful to Corey Cheney with Provident Media Group (www.providentmediagroup.com) for undertaking this task!  We’re also very thankful for the Johnson family who are hosting the boys during their stay, and to Timothy, Mark, and Nathan Johnson for their help.
It’s been an incredible experience for the boys, as they are wrapping up their visit with only 2 days left. Nathan promised he’s going to take me back one day to see these gorgeous views! Until then, I’ll have to enjoy the music video which will be released in a few weeks!

The bates are on 19 kids and counting!

Summary should follow later this week!
at April 15, 2014 No comments:

I had some requests for random shots of our everyday life, so I’ll try to include some in the next few posts. Chad and Erin usually come over to help give haircuts, which is a HUGE help! Here’s some photos of two of those visits!

19 kids and counting plus a wedding

Zach and Whitney announced to the family they were expecting their first child on Valentine's day. Kelly stated on her blog that they were a week apart from Chad and Erin's pregnancy.
at April 08, 2014 No comments: