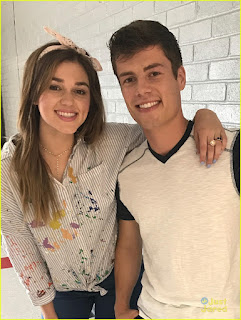 Lawson is working on a new music video that will come out this summer. Lawson says that he has poured out his heart into the new record. The single is titled "Past the past".

Lawson prays that this will be something that all the amazing people supported his joy to enjoy this music.
Where does Sadie come into it?
She plays his love interest in the video. Lawson loves the fact that she was prefect and incredible to work with.
Sadie adds that Lawson is such a gentleman and one of the parts of the video will portray him different but they all laugh at when he was trying to be a jerk.
Sadie says that it was pleasure to be with the Bates family!

For those that don't know who Sadie Roberston is, she appeared in Duck dynasty with her family on A&E. The show aired from 2012 to 2017.

Be sure to check out this article from justjardjr.com for more detials and photos!
http://www.justjaredjr.com/2017/05/31/sadie-robertson-films-music-video-with-lawson-bates-exclusive-pics/?photomorehere
at May 31, 2017